The Future Of Work: Acceleration of Automation Post COVID-19

Home
»
Future of Work
»
The Future Of Work: Acceleration of Automation Post COVID-19

In Roald Dahl’s delightful book, Charlie and the Chocolate Factory, Charlie’s  – the protagonist’s – father loses his job (of adding lids to toothpaste tubes) when the owner brings in machines to do the job. The workers are asked to leave and their lives plunge into poverty.

And that’s the general perception around automation – that it impoverishes workers, benefits businesses and takes away jobs. The truth, however, is not that straightforward.

Historically automation has had mixed receptions – depending on which side of the fence the people are on. Businesses have traditionally welcomed it. Workers have not. Today, as COVID accelerates automation, the debate has rekindled – will automation take away more jobs that it will create.

The answer is a complicated one. Automation will (already has) definitely take away jobs, especially the laborious, repetitive ones which employ millions of workers across sectors – think tollbooth operations, manufacturing units, cleaning, nursing, and even office jobs such as administrative support workers, telemarketers and insurance claims – it’s all being automated as we speak. But, that’s not all. While traditionally automation replaced jobs of lower skilled workers, now its making inroads into areas that were thought of as automation-proof, so to speak.

Microsoft’s move to fire dozens of journalists recently is a case in point. It let go of people responsible for curating and editing articles for the MSN website. The plan is to replace them with automated systems that will curate and select news stories. So yes, it’s not about a certain income group anymore – though the lower income earners may still be the worst impacted.

And here’s the interesting point – although Microsoft said that there was no connection between its decision to let go of its people and COVID, the fact that it happened after the pandemic hit was not a coincidence. True, that the change may have been coning anyway, but COVID definitely accelerated it.

And that’s the point – automation has been accelerated exponentially

Which brings us to the next point – what’s been automated, will stay automated, even post pandemic. As work from home becomes the new normal, some jobs will be created and some will be lost. Businesses that are reaping the benefits of automation are not likely to see this change as temporary.

As COVID pushes economies s around the world into  recessions,  automation is emerging as a top favourite in  the future of work. Companies in India like Mahindra, Toyota and Tata Steel have already made plans to automate in the future.

One of the most pressing reasons as to why the world continues to struggle with the virus is because no one was prepared. Going forward, all businesses as well as state governments will make ensure they have crisis management toolkits in place. And a key part of this toolkit will be the resources to carry out work and life in the case people cannot physically be present. Automation will have a big role to play here Experts argue that with social distancing directives (which may continue after COVID is gone) will call for automating work, in order to maintain safety of workers and consumers both.

Some worse than the others

A report published by George Washington University names a few sectors which are especially impacted by the virus and are “at-risk” for automation. Close to 73% roles in the food industry, 44% of wholesale trade and 36% in healthcare and other human services. Further in this article, we’ve explored how some industries that were at the frontline of the pandemic accelerated automation during COVID to stay in the game and secure future of business.

Undoubtedly, the most important (and impacted) sector at this time, healthcare is where  the need for accelerating automation is the maximum. It’s been directly impacted and has had to innovate on its feet. .

Robots, for instance, are proving to be of great use for nursing tasks. Jincy Jerry, an Assistant Director of Nursing in the Infection Prevention and Control Department at Mater Misericordiae University Hospital in Dublin, told UiPath – a robotic process automation platform – that

“Given that IPC nurses spend close to 30% of their day with administrative tasks, for the past few months I have been looking at ways to make software robots part of our daily jobs”.

Technological developments like Artificial Intelligence, thus,  have a key role to play in the healthcare industry. From image diagnosis to nurse robots – there’s  vast potential, and the need has never been felt more than now to have more hands-on deck – preferably non human. The applications also go beyond the hospital and help in national security and safety of citizens.  China is an  example of how technology and automation are a valuable  crisis management tools. During the outbreak in their region, they used big data and AI to map cases and support healthcare facilities –  an example that illustrates the importance automation in the healthcare industry, triggered by the current crisis. India, not lagging behind, also developed an open-source digital service called the Aarogya Setu App to facilitate contact tracing.

Healthcare, however, is only the starting point. . The  tremors of accelerating automation will soon be felt in other sectors of the economy. Especially in other key sectors that were at the frontline of this pandemic – grocery and retail, travel and education. But the solution is not so direct and neither is automation simple, or cheap. Solutions are complex and work under a variety of social and political influences.

Probably for the first time ever,  retail and grocery workers are being  looked at with a different, warrior-kind of respect. These workers have been  at the frontlines, providing essential items to the population while constantly putting themselves at risk. COVID-19 led to  a spike in online sales of grocery and other retail items, as people stayed locked in and increasingly turned to online services for their need. This unprecedented demand was not something retail stores were prepared for, but were rather forced to fulfil. In Australia, for instance, , some major grocery chains like Woolworths and Cloves had to suspend online orders due to a surge in e-orders.

Again,  this spike in demand is not completely circumstantial. Experts believe this trend of increasing online shopping was already on the rise and is here to stay. In response to the “new normal”, Woolworths, has announced A$780 billion in technological infrastructure to replace 1,300 workers. Coles has also planned for two highly automated customer-fulfil centres in Melbourne and Sydney, expected to be ready 2023.

The worst impact of COVID has been borne by the travel industry. Air travel, which was one of the first travel mediums to be suspended since the crisis, has tried to innovate hard and has also moved towards automation to reduce human contact and make travel safer. Airlines are looking at using attended as well and unattended automation in finance and accounting, HR and IT sectors . Furthermore, day-to-day operations like booking, baggage handling, billing etc. are all now being slowly automated (or moving towards it)

Automation had been widely adapted in the manufacturing sector long before the pandemic, but it’s expected to be even more common now. Due to social distancing directives and sanitization measures, many factories and manufacturing centres, which run on manpower, have had to shut down. All this, combined with a fluctuating demand for goods, calls for a consistent and efficient system in manufacturing using AI and automation.

These were just some of the industries that were pushed into accelerated automation because of the pandemic. The change will soon be felt across sectors – and by the time we are out of this, a pre-COVID world will seem like the ancient past.

Looking towards a pandemic-kindled automated future

Whether you were at the front line of this pandemic or not, there is no doubt that the future of work is bound to change and become highly automated. Question is, what can people do to remain relevant? 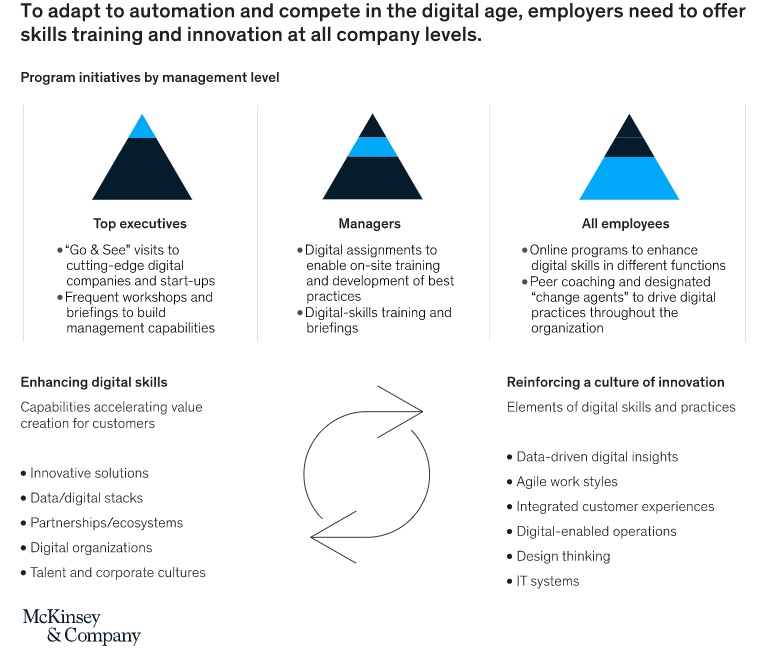 The answer is not simple, but it’s one that we’ve been hearing for a while – never stop learning and up-skilling. In a world that is motivated now, more than ever, to turn to automation, it’s important that job seekers arm  themselves  with skills that stand the test of time and hopefully, even pandemics. We’ve done an in-depth dive into what skills you’ll need in the future , you can find that here.

Automation, it is clear, will impact every sector and, to an extent, every level of work. However, it will also create jobs and newer skills will have to be learnt (for which governments and educators will have to think about providing the right skill training). The art will lie in acquiring the right automation-complimenting skills and moving on from the automation-substitution ones.