As the pandemic has raged though the world, it has taught us some critical lessons. It has also led innovations in many industries which have felt a greater impact of the pandemic. One such sector is the Care Economy. We discuss it today.

In this article we'll be looking at :

Here’s what we cover today.

What's the care economy and why should we care?

Care work is defined by the International Labour Organization (ILO) as “a set of activities and relationships aimed at addressing the physical, psychological, and emotional needs of people and children, young and elderly, fragile and able-bodied.”Care workers incorporate a broad scope of professions ranging from Doctors and College professors at one end of the spectrum to personal care workers, domestic workers and childcare care workers at the other end. For the betterment and fostering of the current and the future population, this section of the economy is responsible for contributing provision of care and services in both paid and unpaid forms. The prominence of this sector increases now as it is one of the fastest-growing economic sectors and a hotshot of employment growth worldwide. According to the Forum of white paper, there is high demand in the care service sector as this sector has immense potential to generate varieties of job opportunities that can ensure a more flexible way of working and boost labour force integration for informal caregivers.

A care infrastructure becomes robust when it is publicly funded and recognises care as something that is not the responsibility of an individual alone but a social one. Such a system will focus more on valuing the care workers and provide financial assistance to each other.

Recently, President Joe Biden emphasised care workers and the care economy in his infrastructure bill; though the bill, he aims to understand the work of care workers and provide them with the necessary support. This bill mainly focuses on child care and care for ageing adults and people with disabilities. He plans to expand access to long-term service and ensure high-quality,affordable and reliable child care. He has made a master plan to invest$40 billion in the child care sector and raise the minimum wage to $15 per hour. These policy changes have become an eye-opener for many countries to rethink their care economy policies.

As per the World Economic Forum report, it is estimated that between 2020 and 2023, around 40% of all projected job opportunities in emerging professions will be created in the care sector. Care services are one of the fastest-growing subsections within the service sector economy and in the middle-income countries, the service sector economy accounts for around 70 % of GDP and total employment. 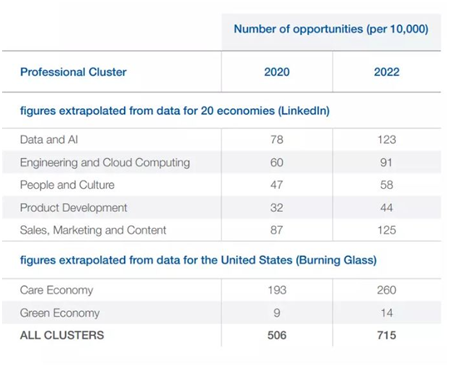 The International Labour Organisation (ILO) Global employment report shows a path-breaking discovery in the care industry. The report predicts growth from 206 million jobs to 358 million jobs by the end of 2030 in the care industry and this drastic increase will be based on the sociodemographic changes. This report also says that the figures could go up to 475 million if the government invests more in education, gender equality, health and long-term care.

Once there is a surge in care work worldwide by 2030, India’s care economy will produce 11 million jobs within the country, of which 32.5% will be by women. This points towards the fact that the economic revival and growth after the Pandemic and in the future will be more inclusive by care economy having an impact on the economy. Not only will the investment in the care economy guarantee a high-paced inclusive growth, but it will also help a county like India to achieve sustainable development goals.

As we are on the verge of being ruled over by artificial intelligence and automation, the ‘future of work’ conversation has stepped into the care industry as well. But what a 2016 study by McKinsey says is that robots can never take over the care sector as it requires being compassionate and empathetic. His study found that the “automation potential “of care jobs is only 11%, as the rest 89%, requires a human workforce. This makes it more lucid to us that the jobs in the care sector are human-centric jobs which will be the job of the present and the future.

On the other hand, even when this is being said, China has already started making cute robots with colourful headpieces that resemble a living anime figure. They found a future in the care industry and calls the robots’ care bots’ China has also made plans to make the care sector into a $4 billionindustry by contributing a large portion of it for eldercare.

The Pandemic has wreaked havoc on our daily routines and taught the world that for any society and economy to thrive, care work is significant as it is hard to lead any further without the service of the paid and unpaid care works. The existing chaotic situation around the world has shone an intense lighton many countries to focus and work better on their care economy as currently, theworld’s adult population is living longer than it had ever lived before. All countries’ populations are ageing, even those with comparatively high fertility rates but shorter life expectancies at birth. It’s also essential to think about caring for those who have short-term or long-term illnesses and disabilities. Just like how innovations in artificial intelligence will show our productivity in the future and investing in the future generation will decide our national security,what matters in the care economy is how well we care for the one in need and the less abled among us, as that will decide how many of us will have our best day!