As is happening with everything in our lives, the idea of employment and work is getting redefined. It is now unimaginable to work in one organisation for your entire professional life – something that was common in the previous generation. People worked for one company all their lives and co-workers became like family. Not anymore.

‘Gigs’, ‘agile workload’, ‘independent contracting’ and ‘freelancing’ – these are some words that now define the nature of work.

Here’s a look at how these are changing careers and the workforce landscape.

Despite the comfort of a 9-5 job and the financial stability that comes with it, many, particularly the millennials and after, have grown weary of the monotony and drudgery of traditional employment. This has resulted in a noticeable boom in the freelance workforce.

Let us get some definitions in place so you know what we are basing our arguments on. ‘Gig economy’ and ‘open talent ecosystems’ are the new buzzwords in business. What do they mean? Think of the times a musician or a comedian has said “I got a gig” and you have already understood gig economy. In this set up, companies prefer hiring independent contractors and freelancers “for a gig” instead of full-time employees. It is flexible, temporary and often simply connects the worker with the customer. Think of Uber if you are looking for an example. According to a study conducted by Forbes, 50% of the US workforce will be into gigs by 2020.

Open talent ecosystems or talent economy functions primarily like a gig economy but emphasizes on expertise or “talent”. As Sun Microsystems co-founder Bill Joy famously remarked, “There are always more smart people outside your company than within it.” Organisations are creating new spaces to include partnership and freelance talents for their problem solving needs. From an individual’s point of view, in this economy, you have complete control over your work, your expertise is put to its ideal use and you have the flexibility of choosing when and how much to work.


The gig economy - pros and cons

We can get to the bottom of this model when we break it down into its basic components: the organisation (employer), the independent contractor IC (employee) and the contract itself. The contract aspect of it is stripped to its bare minimum. ICs or freelancers are hired for one project or a particular task and render their services to the organisation until the completion of the said task. They are compensated for the work done and that is it. It does not include any traditional employee benefits.

For the organisation – pros

For the organisation – cons

The biggest drawback is that loyalty is no longer in consideration. Nobody is going to work for thirty years in the same place. Take a look at the war between Uber and Lyft and you will realise how easy it is to poach ICs. Additionally, the company is staking its reputation on the work of an IC.

For the independent contractor – pros

All the advantages of gig economy can be summed up in one word – flexibility. It is the driving factor behind the entire system. A college student can start earning by freelancing after his classes. An Uber driver can also double up as a delivery executive. A software engineer who is employed full-time in an IT company can also code freelance if his/her contract allows it. Working while studying or taking up multiple projects are huge advantages for people looking to establish themselves financially.

In addition, gig economy provides opportunities for people who are trying to navigate delicate work-life balances. It is a boon for retired people and homemakers for the can choose projects to suit their convenience.

For the independent contractor – cons

A contract with Scarlett Johansson or Brian Wong is not the same as a contract with a delivery executive at Big Basket even though all of them are independent contractors. The difference here is expertise. It is the individual’s talent that sets them apart. In this set up, a customer is paying for the skills of the talent and for the hours one has taken to reach that level of expertise. In this case, the platform, unlike in gig economy, is just that. It is a space that allows specialists to showcase their skills and determine their own compensation in return, also contributing to their growth over time. Since such specialised skills cannot be commodified, the cons of gig economy are addressed while the pros continue to exist. 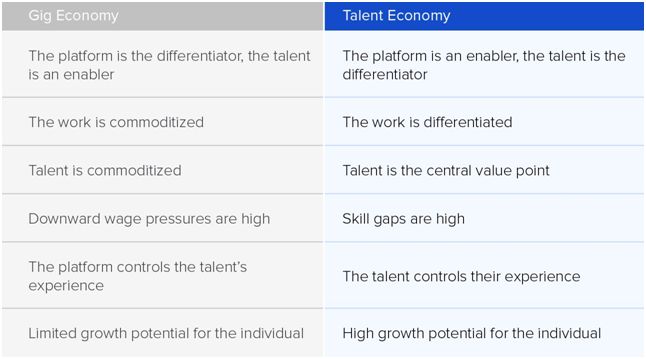 Source: The End of Traditional Employment—The Other Gig Economy

The question that pervades all our thoughts is this: Will a gig or talent economy completely phase out traditional employment?

Answer: It is highly unlikely that such a scenario will come to pass. While all trends show an increase in freelance work, at some level, an organisation needs to have people who are loyal, who can be called employees in the traditional sense of the term. Without which, the entire structure of businesses, market and competition will have to be redefined. However, it is probable that more specialised professionals will turn towards freelancing to avoid being restricted by the demands of one company and increase their exposure. As talent economy expands its wings, it is natural for organisations to reassess hiring, team building and payment policies.

At this juncture, let us not forget that being part of the talent economy stems from privilege and adds to it. Not all job profiles can find its space here. We also  have many organisations working towards promoting gig economy for their own benefits. The only response that we have at the moment is to evolve: the organisation to reassess and reframe hiring policies keeping in mind the human component, the ICs to keep up with the requirements of the market and the legal system to include laws to prevent the exploitation of workers, particularly in the gig economy.