Coronavirus – What It Is. And Should You Be Scared?

We’re sure you’ve been reading about the Novel Coronavirus and the dangers it poses to human health.

News feeds have been awash doomsday-sounding headlines; with minute-by-minute updates on the number of people who’ve been infected and the ones who’ve succumbed to it (they can give cricinfo a run for their money).

While it’s important to know all you can about the virus and take precautionary measures, it’s equally important not to panic. Surgical masks and alcohol-based disinfectants have flown off the shelves as people are hoarding them for fear of an epidemic. Soon we’ll see what’s App messages on how we should start piling our homes with essentials food supplies.

It’s a virus, not World War 3, so let’s get some perspective.

First with the good news

It’s not as bad as you think

True that Coronavirus is spreading fast, and the numbers are scary. But, here’s the thing – in 80% of the cases the symptoms are mild. And while we don’t have a clear picture of the fatality rate (every country is reporting it differently) what is known till now is that the ones who are at most risk are elders (over 70) and those with underlying conditions.
Here’s a breakdown: 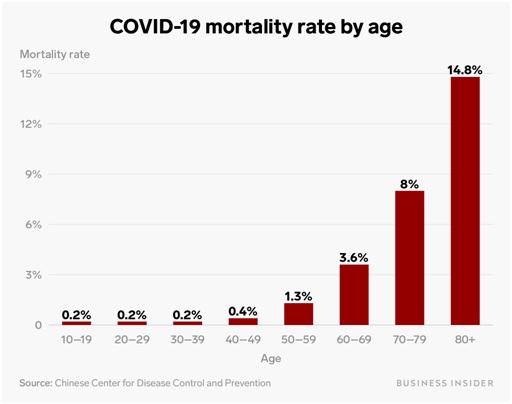 Now, tell me how bad can it get?

No one knows. It’s all in the data, which, right now is all over the place. What is becoming clear though is that as the cases are being reported, the fatality rate seems to be going down. South Korea, for instance, has tested more than 140,000 people and confirmed 6,000 cases – and they report a fatality rate of 0.6%.

The United States, on the other hand, has not tested near as many, so the death rate seems higher.

And in terms of how bad it can get, no one can say. It’s wait and watch right now, but here’s a story from a man in his late sixties who got it, and got out of it.

What’s exactly is this virus?

The Novel Coronavirus is a part of a family of viruses that live exclusively in animals. The fact that it spread to humans makes it a zoonotic virus – meaning that it spreads from animals to humans, as was  the case  in the epidemic caused by SARS coronavirus in 2002, which spread from bats to civet cats and then humans in the Guangdong province of South China. Similarly, the MERS (Middle Eastern respiratory syndrome virus caused more than 800 deaths. Identified in 2012, this virus too was believed to have spread from bats to camels and then to humans in Saudi Arabia.

According to a study, published in The Lancet Infectious Diseases, the 2019-nCoV shares 80% of its genetic code with the SARS Coronavirus. Also, as per reports from Wuhan, China, the COVI-19 seems to have spread from bats to mammals, mainly pigs or civet cats, and then to humans. However, conclusions also suggest that the Novel Coronavirus could have made a direct jump from bats. According to a first study led by scientists at the Wuhan Institute of Virology, the Novel Coronavirus might have made the jump to humans from the animals at the Huanan Wholesale Seafood Market, which was closed down in January 1, 2020.

I am confused with all the names - is it Novel Coronavirus or COVID 19 or 2019-nCOV?

These terms are being used interchangeably, but they all refer to the same strain that is causing all the mayhem. Because Coronaviruses in itself are not new, this one that surfaced in 2019 was given a new name to distinguish it from the others. It was called Coronavirus disease 2019, which abbreviates as COVID-19. The ‘CO’ stands for ‘corona,’ ‘VI’ for ‘virus,’ and ‘D’ for disease. Earlier it was called “2019 novel coronavirus” or “2019-nCoV”.

What are the signs and symptoms?

The symptoms are similar to a common cold and the flu. These include:
• Cough
• Fever
• Shortness of breath (difficulty in breathing) 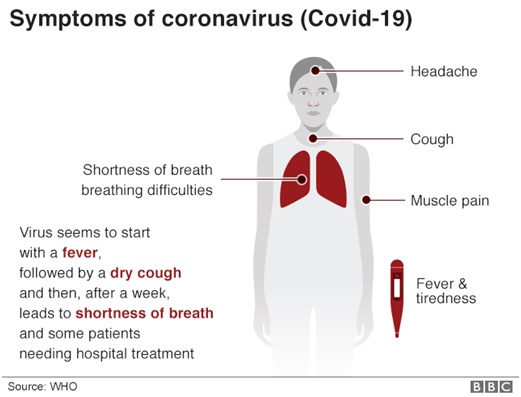 In most cases the fever seems to come first, followed by a dry cough. A week later, it leads to the shortness in breath. It is important to remember that symptoms may appear two to 14 days after you have been exposed to the virus.

How many people have been affected?

The numbers are rising daily. As of March 6th, 2020, the Novel Coronavirus had infected 98,860 people all over the world. Estimated deaths now stand at about 3,390. The latest surge of cases is emerging in South Korea, which now has the biggest outbreak outside of China. The other two hotspots are Italy and Iran.

Is it spreading in India?

There are now 42 cases in India – mix of people who either travelled abroad (Italy, Dubai, Malaysia) or those who came in contact with these travelers.

Many schools and offices have been shut. PayTm shut its Noida and Gurgaon offices after one employee, who had travelled to Italy, tested positive. Conferences and events have been cancelled all over the country.

What this means is that there may be many more cases than have been reported. It is important, hence, to stay away from anyone who seems to have flu-like symptoms.

Here’s a link to the Indian National Center for Disease Control to know more about the outbreak in India:

Is there a cure yet?

Unfortunately, not yet. Doctors are simply firefighting right now – like providing lung support to those who need it. A vaccine is being developed, but it is not anywhere close to being tested yet.

What can I do to protect myself?

The World Health Organization (WHO) says that the “most effective ways to protect yourself and others against COVID-19 are to frequently clean your hands, cover your cough with the bend of elbow or tissue and maintain a distance of at least 1 meter (3 feet) from people who are coughing or sneezing”

• Wash your hands regularly and wash them thoroughly. What’s thoroughly? Follow the 20-second rule and sing happy birthday twice! Yes, it’s a thing. It was set by The Royal Pharmaceutical Society, which states that only sure way of getting rid of viruses and bacteria that can cause colds, flu, infections and upset stomach is by singing happy birthday twice while washing hands!
• Cover your mouth and nose when coughing or sneezing
• Avoid touching your eyes, nose and mouth
• Avoid very crowded places (if possible)
• Stay away from people who are coughing and sneezing – for instance if you are in a cab and the driver seems to have a cold, you must leave and get another one.

And now, some myths..

I’ve heard that spraying alcohol or chlorine all over your body will kill the virus. Is that true?

No, that’s not true. Unsurprisingly, there are many myths surrounding the Novel Coronavirus and they are doing the rounds on What’s App and email. Do not believe them without verifying them first – the WHO site is a great place to look.

Here are some superb links that’ll help clarify many points. Do take the time to read these, because there’s a lot of information out there about the virus and some of it is not exactly true.

So do look these up.

Stay safe and if you have any flu-like symptoms, contact a doctor. May the force be with you!

Scholarships to Study in Canada for Indian Students: A Guide for International Students

Study in Canada without IELTS: Everything you Need to Know

Global Ed
How to Study in Canada for Free in 2022?

Global Ed
Study in Canada without IELTS: Everything you Need to Know