When we think of blockchain, “cryptocurrency” is the first thought that pops into our heads. However, did you know that blockchain is being used in a large variety of applications including one which allows a customer to trace the details of the workers who produced the shoes they just bought?

Today, we look at what blockchain means and the career options associated with it.

Set to revolutionize various industries, blockchain technology is gaining widespread acceptance. However, the misunderstanding surrounding the technology is such that it is being falsely interpreted to be a messiah of sorts.

A blockchain is a publicly available ledger that is used to log transactions. As the name suggests, blockchains are made up of blocks of data that are linked to each other. A new “block” created within a blockchain to record a transaction contains the address or the link to the last block in the blockchain, thereby creating a “chain”. Each block contains the following – a link to the previous block, timestamp and the actual data. The timestamps represent when a particular block was added and these cannot be modified by anyone. The data stored within the blocks could be anything. In terms of cryptocurrency, the data represents the actual value of a remuneration being paid for some service that was received. 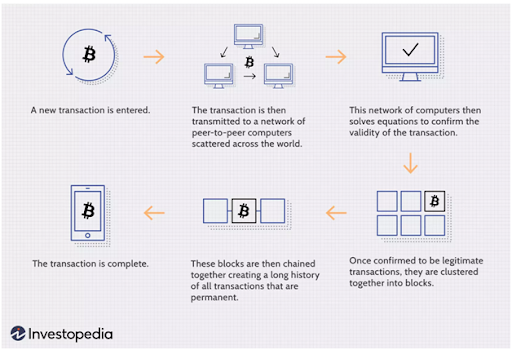 Blockchains essentially have three major properties that make them popular – they are distributed, highly secure and are publicly available. As blockchains are distributed, the files or logs that represent transactions are stored at multiple locations on various computers. Blockchains aren’t under the control of one person or an organization because of this distributed nature and cannot be edited or deleted by those wanting to do so, unless all who are part of the blockchain agree to such a modification.

Security is ensured through the implementation of cryptography where the blocks themselves are encrypted and require keys in order to access that particular block’s information. The data is immutable and the timestamps of these blocks cannot be tampered with.

Some of the current applications of blockchain that most aren’t aware of include using them to trace the origin of diamonds and where they are headed, track where shoes were manufactured and who made them so that the customer would know if what he pays for the final product reaches the maker, maintaining records at government offices, verifiable credentials and tracing and tracking the origin and the path of goods. Some of the more common applications of blockchain include cryptocurrency, food industry, healthcare, real estate, insurance and supply chain, among others. Click here to know more about cryptocurrency!

Now that we have seen the applications of blockchain, let’s take a look at the different career opportunities in blockchain that are associated with it.

Blockchain technology has been gaining traction over the past decade and it has seen an increase in the number of job opportunities it has created. Some of them are discussed below.

If an organization needs to implement a project which is based on blockchain, the blockchain project managers take up the responsibility of creation and implementation of such projects. These roles are managerial in nature and require the project managers to be well-versed with the technology as well as possess great people skills.

When a blockchain project gets deployed, it is important to have a user interface to go along with it. This is where UX designers come into the picture. They need to design interactive modules that make it easier for users to navigate through the application while also being secure enough to handle transactions.

Blockchain architects design how a blockchain should behave. They are responsible for mapping the different tasks like security, UX design, development etc with the relevant personnel in order to get it done as per the design.

Of course, these aren’t the only opportunities available in blockchain. With the right set of skills, one could land an even better job that pays extremely well.

Skills needed for a career in Blockchain

To become a blockchain expert, it will require years of experience in the field. However, to begin a career in blockchain, one will require the following skills.

Considering how the blockchains themselves are a type of data structure, it would help to build one’s basics in computer science by understanding how programming works and how data structures can be manipulated to hold different types of data. One must also understand how cryptography works – public and private keys, hashing, encryption, pseudorandom functions etc. By understanding how cryptography works, one can create systems that can safeguard blockchains and their data. It is also important that one understands the blockchain architecture and how decentralized systems work. Understanding how smart contracts work is also necessary as most blockchain systems employ the use of smart contracts for transactions where a middle-man can be avoided.

Communication skills are really important when it comes to conveying ideas regarding the blockchain to people from non-technical backgrounds. It plays an important role when working in managerial roles which requires talking to people from different walks of life.

If you have the skills and the aptitude, this is a field well worth considering

What is Nutritional Science? A Guide to a Healthy Future

Studying Engineering in the U.K

HR Trends in a Post-Pandemic World

Global Ed
What is Nutritional Science? A Guide to a Healthy Future

COVID has been a wake-up call for us to take our health, immune system and food habits more seriously. It's

There is a reason why engineering is one of the most popular choices after school. What makes it truly click

The workplace culture has seen a seismic shift since the COVID-19 pandemic began. Two years after the world adapted to

As we enter another year, it's time to look ahead to what the future will bring. Our collective tomorrow will