The world has always been divided between the haves and the have-nots. In the twenty-first century, with the digital revolution, this gap has also turned digital.


Bridging the digital divide - the basis

The digital divide, very quickly, is the term used to describe the uneven distribution of information and communication technologies in society. It is caused by one of two things: either lack of access or lack of knowledge to use technology. It also includes a lack of access to reliable network and internet connections. With increasing dependence on tech, the divide keeps widening, preventing some communities from keeping up with the rest of the world.

Share of population using the Internet in the World 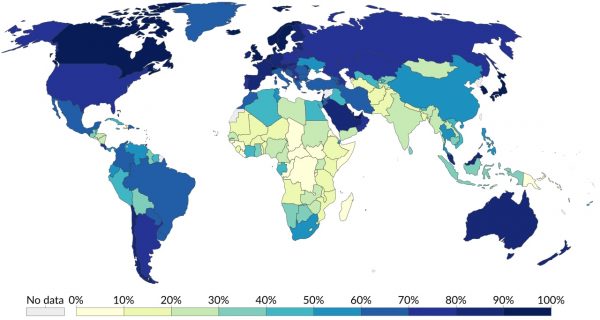 
Digital Divide in a Post-Pandemic World

This is a particularly important conversation to have, as most of our professional and personal lives became online since early 2020. Health, education, finance, fashion, you name any sector, it has been reshaped by advancements in Artificial Intelligence. This makes the digital gap that much more dangerous, directly leading to more hierarchies and stratifications in the world.

Typically, digital divides are attributed to developing or least developed nations. This is not entirely true. Yes, they are more vulnerable due to the lack of infrastructure but it is a problem that is widespread. However, according to the World Economic Forum, about 6% of the American population has no high-speed connection. That amounts to almost 21 million people. In Australia, the metric is at 13%. Europe appears to be faring well in this regard.

It has always been a topic of debate in the US, for instance. President Biden’s American Jobs Plan, at its core, is a plan to invest $65 billion to bridge the gaps that exist in the digital infrastructure of the nation. A study conducted at Stanford showed that the factors that contributed to the divide were age, income, race, and geography (urban vs rural). As these social factors feed into the digital divide, it exacerbates systemic injustices that continue to benefit only the privileged. Nearly 12 million children in the US did not have access or were under-connected as schools went online, of which over 40% were from Black, Latino and Indigenous communities.

If this is the scenario in the First World, we can infer how much direr the situation is in the rest of the world. According to UNESCO, only 47% of households in developing nations and 19% in the least developed countries are connected to the internet.

In a data-driven world, it is important to quantify the digital divide, rather than talk about it in theoretical or ideological terms. The Network Readiness Index (NRI) is a measure of the digital transformation of a country. Of the top ten nations with the highest NRI, 8 are from Europe. In a list of 134 countries, India is in the 88th position, according to 2020 statistics. You can check NRI 2020 for the complete list of countries and their rankings.


How can it be bridged? - A national perspective

UNICEF has launched a project called Giga with the aim of connecting every school to the internet.

Europe has been able to get ahead of this curve thanks to its Digital Agenda for Europe (2010) and the Digital Single Market (adopted in 2015 by the European Union). Emphasizing on funding, regulations, and mobilising stakeholders in the IT sector, these policy decisions have been able to bridge the gap quite successfully.

In the US, Biden’s government is pushing for a bill that will allow increased investment in the IT and Communication sector. The National Urban League is now working on the Lewis Latimer Plan for Digital Equity and Inclusion and has four key goals:

At the individual level…

If you are wondering “What can I do about it?”, here is how you can help.


Why should the digital divide be bridged at all?

Technology has seeped into the very core of our society. And contrary to common belief, tech is not “neutral” and “same for all”. Your access and familiarity with it come from a position of privilege. With a gap that is allowed to stagnate or expand, you are looking at an entire generation of learners losing out on their education, people losing out on access to telehealth, and being erased from being fully contributing members to the national and global economy. It also has a direct impact on employment opportunities and therefore social mobility.

Internet, from being a luxury, has now become a necessity. There are organizations advocating for it as a basic human right. With universal access, opportunities abound, giving everyone equal access to live and function as global citizens. Bridging digital divides is getting one step closer to building an inclusive world.