The Game Changer: How Statistics Changed the Way we Interpret Things

In the in-trend careers, statistics is the new black.

With all the talk about data and everything that can be done with it, there’s now a need for statisticians who can provide deep insights by decoding unstructured data. While you can read all about statistics and its applications in this piece we wrote recently, today we look at some human stores – of statisticians who used statistics for data analysis and succeeded in producing astonishing outcomes.

Abraham Wald and the fighter planes

Abraham Wald was a Hungarian mathematician who was part of the Statistical Research Group (SRG) at Columbia University during World War II. The military deemed it necessary that the fighter planes be armoured so they’d be hard to shoot down. The problem was that the armour was making the aircrafts heavier. Several statisticians were tasked with the job of identifying the possible regions on fighter planes that could be optimally armoured so that aircraft casualties could be reduced. Research was conducted on the aircraft that returned from conflict. As shown in the picture below, by mapping the damages on the aircraft, the research team could pinpoint the regions on a plane that required reinforcement. 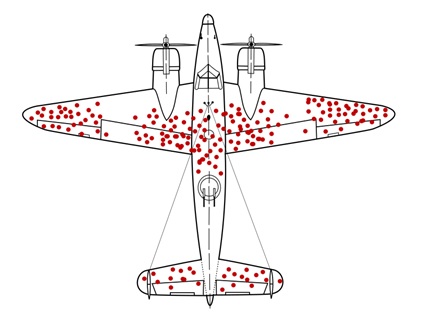 There were more bullet holes in the fuselage, not so many in the engines. Wald was asked to determine how much armour was required to protect the fuselage, since the team had already zeroes-in on the region to be the most vulnerable.

Abraham Wald, however, realised that the researchers were missing something. What they didn’t realise was that the planes that were returning had bullet holes in the regions they thought were most vulnerable. The aircraft that didn’t return were shot at all the other regions on the plane. From a statistical standpoint, the researchers analysed where the aircraft were suffering the most damage when they really had to analyse where the aircrafts suffered enough damage without catastrophic failure. This analysis was based on the survivorship bias.

Without a statistical analysis of the problem, the researchers were headed towards failure. The problem also stresses the importance of proper datasets.

Moneyball is a popular movie that tells the story of how one baseball team and its managers, Billy Beane and Paul DePodesta, made use of statistics to bring out the best from a team formed out of professionally low-ranked players. It’s based on the true story of how a baseball team, the “Oakland Athletics”, changed the way a baseball team management executed plans. In fact, the story not only teaches lessons about the importance of statistics in the management of sports teams, but also about smart investments.

Being a poor team, the Oakland Athletics didn’t have many options when it came to picking highly rated players. Richer teams would simply buy off such players with the money they had to spare. The big teams relied on the abilities of their scouts to pick the best players. The players were selected based on their specialities – pitching, fielding or batting. Beane and DePodesta realised that in order to have a chance against the big teams, they had to look at something that the others had overlooked. The managers mined through decades worth of baseball data and came up with astonishing statistics that would later help them become the first team to win 20 games straight in over a hundred years. Instead of focussing on a lot of figures, they looked at two data points to predict a player’s abilities – slugging percentage and on-base percentage. This theory is now known as the “Moneyball theory”. Using this theory, the Oakland A’s went on to average 95 wins, capture four American League West titles, and make five playoff appearances between 2000 to 2006.

The reason why Beane succeeded was that he chose not to ignore the analysed results. He realised that no matter how off the predictions seemed, data did lie.

And now, another little known story of success…

Salam Qureishi and the Dallas Cowboys

One of the most inspiring stories related to statistics has to be that of Salam Qureishi’s dream run.

Born in India, Salam moved to the US for higher education back in the 1950s. He joined IBM as a computer programmer. The Dallas Cowboys, a relatively new team of the NFL, decided to work with IBM in order to set up a computerised player drafting system. When the owners were infatuated with how IBM had measured different players’ speed on skis by mounting chips onto their boards, they decided to seek the former’s help in revamping their team. At IBM, the team was introduced to Salam Qureishi, an “underling”. A man who had no idea about football or how it worked began to make use of statistics to etch out plans for how the team could be victorious.

He was given phrases, literally, about how good a player was. About 240 phrases had to be quantified in order to measure a player’s skills. Every player was gauged based on a selected set of skills (ex: power runner, outside running ability, elusive runner etc.) which determined if he was going to be a good choice for a particular position in the games. In 1964, the program that Salam had developed was used in a mock draft by the Cowboys. The system was able to select players that weren’t obvious choices, but the team that was put together by the program  ended up being highly successful. In fact, some of the most popular Cowboys’ players were originally basketball players. The team was so successful that they appeared in 5 super bowls and are the only NFL team to record 20 straight winning seasons. All of this has been attributed to one man who possessed a huge amount of love for statistics and data.

Quite a lot of statisticians have made their mark in the world using the power of analysis. However, there are many organizations that have understood the significance of making use of statistics to improve their performance and to outperform their competitors. A couple of examples of such teams or organisations are discussed below.

The former US President’s campaign team hired close to a hundred analysts to crunch the numbers. They worked in collaboration with Rentrak, a data company. The team made use of Facebook data of registered voters in the country, the persuasibility of voters based on their interests etc to generate key strategies. The “persuadable” voters were those who were not supporters of Obama but could probably vote for him after being convinced by conversations that discussed the policies Obama put forward. The campaign might have also tracked the users who visited websites related to Obama. Public voting records and the voters’ responses were also considered for understanding how to canvas those who were against the democrats. The campaign team matched the voters list with that of cable subscribers to understand where advertisements could be showcased. In fact, the team was able to identify the number of hours a target group would watch TV in order to showcase ads at those particular times.

Making sense of it all

The above example are but a few. The truth is that statistics plays a vital role in understanding how our world works the way it does. Data crunching is an inevitable part of life. It is necessary in order to understand the needs of the hour and to analyse what works and what doesn’t. From weather forecasting to understanding climate change, from studying drug effectiveness to disease prediction, statistics is seemingly omnipresent.

There’s been no better time than now to be a statistician.